One of my favorite projects when learning a new language is an RSS reader. It tends to hit many of the major “can I get things done?” parts of a new language that interest me:

And as easy as it sounds, there’s quite a lot that can go into such a simple project. And this gets even more “fun” when you consider adding in UI (whether it’s web or desktop).

I did this quite a while ago for myself in Scala when first learning it, but over the course of time, RSS has been falling out of favor. There have been lots of side services that have popped up attempting to replace it, but I wanted to build a new app for myself trying something different.

I’ve been pretty much behind-the-times when it comes to Twitter. I have an account, but rarely ever used it. But, I noticed that Twitter has support for lists, and I thought to myself, “hmm… major news outlets tweet, maybe I’ll just use Twitter as my news aggregator?” And, so, off I went to start putting together a Twitter client using Scala.

Now, it’d been a while since I put together a desktop app in Scala, and since then ScalaFX has come along nicely, and when combined with Monix, say “hello” to some snappy, easy-to-build, functional, reactive user interfaces for the desktop!

The above code is a bit simplified, but should get the idea across. Everything is just a series of background tasks that run and - as they complete (or fail!) - the interface will react accordingly.

If you haven’t yet had a chance to try Monix (or ScalaFX) in your project, I recommend coming up with an excuse to give them both a try… together if possible! 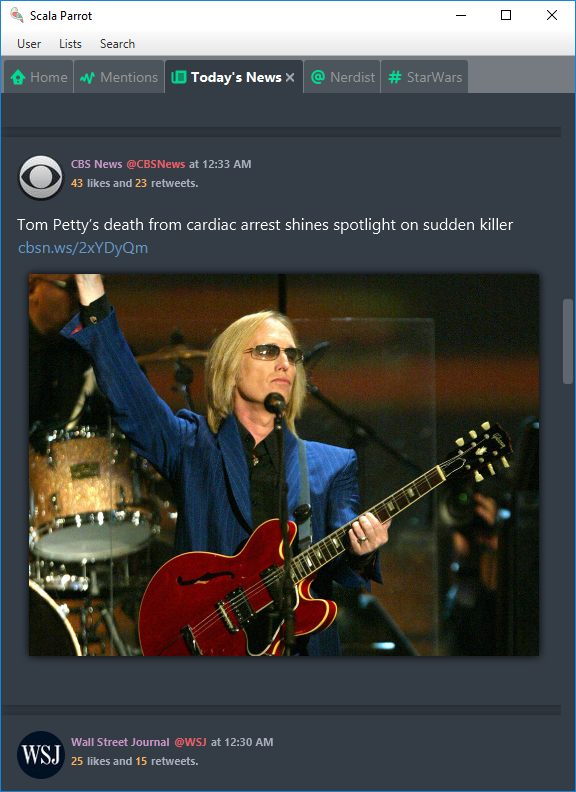 I still have a few more features to add before I’d consider it “RC-1”, but all the basics are in place and I pretty much have it running daily on my work machine and at home. I hope to make the app available at some point in the near future and possibly the sources as well.